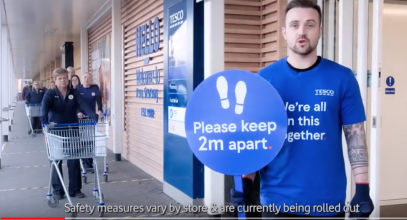 Grocery stores have become front and centre in our conscious these days. They are one of the few places we can go visit legitimately and how they are choosing to respond to both their customers and their staff during this crisis is starting to show that sometimes a return to the well proven proposition and media of the past might be a way to gain cut through.

It must be said as an industry they all seem to be doing right by their staff with Aldi, Asda, Morrisons, Sainsbury’s, Tesco and Waitrose all committing to paying their staff a bonus to say thank you for all the work they are currently putting in.

Some of the long established brands have returned to TV advertising to let the public know what they are doing to keep everyone safe during this crisis. This is an interesting initiative as in the main grocers tend to keep their feel good TV advertising restricted to Christmas, with the rest of the time tending to be heavily price or product driven. In this multi-channel era, it is still TV which reaches the majority of the grocery buying public.

Take Tesco for example. A long standing player in the grocery market, they launched their “every little helps” ad campaign way back in 1993 which was, at the time, innovative and clearly created a platform to give Tesco the brand bandwidth to take on the increasingly competitive market.

But of late Tesco seems to have lost its way. Tesco themselves have suffered a series of very high profile failures and losses in recent years which has seen the company expand, contract and declare in 2014 a profit warning and their share price drop after their profits had been overstated by £250m for the last two years.

But last week saw a return to TV of the “every little helps “ campaign, with a simple but well executed ad explaining to customer how, why and what they are doing instore.

It’s interesting in these fast changing times how both traditional media and a well-executed messaging seems to be having a resurgence.